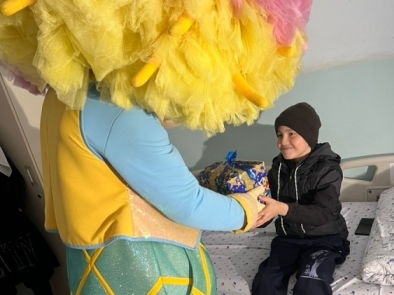 And today's visit is considered a logical continuation of the previously implemented initiative of the fund. In these happy festive moments, the ""Lona" Charity Foundation takes this opportunity to congratulate everyone on the occasion of the New Year 2023 and wishes all the patients of the country and the world a speedy recovery!

CELEBRATION OF INTERNATIONAL DAY FOR PROTECTION OF CHILDREN

Today, on June 1, 2022, with the initiative and financial support of the "Lona" Charity Foundation at the Department of Pediatric Oncology of the Republican Scientific-Oncological Center of the Republic of Tajikistan and Department of Diseases of the body burned of the City Clinical Hospital №3 (Dushanbe) were held

Celebration of the International Children's Day

For the Charity Foundation “Lona", which has been operating in the Republic of Tajikistan since 2009, it has already become a tradition to organize various cultural and entertainment events for children with cancer  and patients of the Burn disease Department of the Capital's clinical Hospital No. 3 on official and national holidays.
In particular, every year, the International Children's Day is celebrated with a special celebration. In this context, a festive event was organized today  under the patronage of the "Lona"  Foundation in order to create a favorable psychological environment and entertainment for patients of the Department of Pediatric Oncology of the State Institution “Republican Cancer Research Center” of the Ministry of Health and Social Protection of the Population of the Republic of Tajikistan.
During the event the history and essence of this holiday were explained to the participants in an accessible form, then a attractive concert program was organized and  a festive table was set and gifts were distributed to all the children. Also the winners of the contest of young artists among the young patients  of the mentioned  Cancer Center were also announced.
It should be noted that such a festive event was also organized for patients of the Burn desiese Department of the Capital clinical Hospital No. 3.
Concerning the history of the holiday, it should be metioned that it is one of the oldest international holidays, which is celebrated all over the world since 1950. The decision to hold it was made by the International Democratic Federation of Women at a special session in November 1949.
Children's Day is an international day because dedicated celebrations  are organized in dozens of countries around the world. It is noteworthy that this holiday has its own flag, which is a green canvas. On it, around the symbol of the Earth, there are five colorful schematic little men.
Taking this opportunity, the  Charitable Foundation “Lona"  congratulates all the children of the world on the occasion of the International Children's Day, wishing them a peaceful sky, happiness and good health.

Another purchase of chemotherapy medicines

The main statutory activity of the «Lona» Charitable Foundation is to provide patients from vulnerable families in the Department of Pediatric Oncology of the Republican Scientific Oncology Center with chemotherapy medicines and some other supportive medicines during their treatment
term.
As we know, chemotherapy is widely used in modern medicine to fight cancer. The method is based on the introduction of highly toxic medicines  into the body that destroys  cancer cells or stopping  their further development. The use of modern protocols in combination with complementary and supportive therapy, full-fledged rehabilitation allows  pediatric oncologists to minimize
complications and improve the result of treatment.
It should be noted that cancer treatment with chemotherapy in many cases becomes the only way to save a person's life.

In this context, timely provision of patients with chemotherapy medicines on a free of charge basis always remains relevant issue for cancer-stricken children from poor families of the country.
On April 9, 2021, with the support of our donors we bought another batch of popular chemotherapy medicines for use of our wards – young patients of the Department of Pediatric Oncology of the Republican Scientific Oncology Center. In particular, the fund purchased the following necessary medicines as doxorubicin, cyclophosphamide, ifosfamide, carboplatin and others, which is an approximate need of the mentioned department of pediatric oncology for the period of another quarter.

Another year is over. 2020 was a difficult year all over the world, but we did not give up and supported doctors, children and their parents.
But children did not understand the phrase  "the holiday is canceled." Observing all safety measures and WHO recommendations, on December 24, employees of the Charity Foundation “Lona” visited children from the pediatric oncology department of the Republican
Cancer Research Center and the children's burn department of the City Medical Center No. 3.
For each child, gift bags with sweets and souvenir stationery were prepared and presented.